Cold weather diseases are on the way, following closely behind leaves changing colors and cooler temperatures. The Fall and Winter months are peak times for many illnesses and sicknesses. Each year, millions of people experience fevers, sore throats, dry coughs, and other symptoms related to a cold-weather illness. In fact, it’s been reported that colds are more common during the winter than any other season. 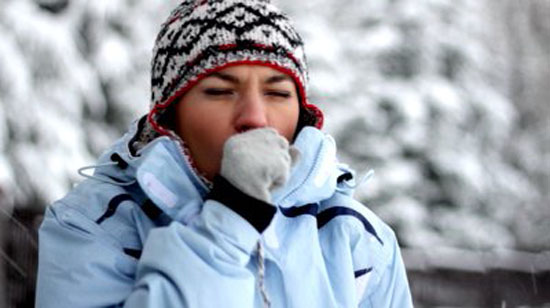 WHY COLD WEATHER DISEASES SPREAD MORE IN THE FALL AND WINTER

Cool and frigid temperatures force people indoors, meaning your facility is likely to see a spike in traffic and visitors. This increases the sharing of surfaces and equipment, thus creating an upsurge in the presence of bacteria and germs.

These pathogens are able to survive in your business for days; weeks even, infecting dozens of guests, visitors, and employees. Killing these invasive microorganisms requires routine sanitizing and disinfecting to prevent bacteria that cause cold weather diseases from running rampant.

In addition to this, people with existing infections don’t always stay home even though they should. In 2013, a Staples study revealed that 90% of employees go to work sick even though they know they are highly contagious.

Also, participants part of a different study admitted still going to the gym while having fevers, chills, sore throats and other clear indications of illness.

There are thousands of diseases people can get sick from year-round, but these are the top 5 known to sicken people during the Fall and Winter months. Continue reading to find out what they are!

Over 3 million people fall ill to the common cold every year, as reported by Mayo Clinic. The average adult cycles through 2-3 colds each year, and that number is double for children. The virus coronavirus causes up to 40% of colds and is most active from fall to early spring (October-April).

Touching a contaminated surface, ingesting air droplets from someone who is sick or coming into direct contact with someone who is infected are ways the common cold spreads. Think shaking hands, someone coughing who doesn’t cover their mouth or touching something that someone with the virus has already touched.

In your facility, viruses that cause the common cold live on surfaces like fitness equipment, computer keyboards or touch screens, in bathrooms, and on door handles/ knobs. These non-porous plastic and metal surfaces are prone to harbor the virus.

21 million people acquire norovirus infection each year. Peaking between January and March, symptoms include stomach pain, nausea, diarrhea, and vomiting which can lead to dehydration.

Once exposed to norovirus, it takes up to 48 hours for symptoms to appear. These germs can live for weeks on a non-porous surface. Norovirus spreads through vomit, fecal matter, air droplets, and to surfaces via microscopic particles. This cold-weather disease thrives in shared environments like offices, schools, and cruise ships where many people are sharing surfaces.

To make matters worse, norovirus is not easy to kill. The bacteria itself is protected by a capsid that alcohol cannot kill, rendering alcohol-based wipes and sanitizers useless against it.

The most common places norovirus may be hiding in your facility include the kitchen, the bathroom, and shared equipment like buffet serving spoons, treadmills, and community supplies.

Third on the list of common cold weather diseases is influenza. An estimated 49 million people contracted the flu during the epic 2017-18 flu season. With the major flu epidemics we’ve seen over the last two years, that number is sure to rise. Influenza peaks between December and February, as the virus loves cooler temperatures and is able to survive longer when it’s cold.

On a hard surface, influenza can live for 24 hours. On a porous surface like a tissue used by someone who is sick, however, it will only live around 15 minutes on average. When a contaminated person coughs or sneezes the virus can spread through the air and survive as an airborne pathogen for hours.

Each year, different strains of the flu spread. H1N1 and H3N2 are the most common types of flu viruses that affect humans, with H3N3 being more extreme. Generally, influenza will spread through the air in your facility. However, it’s also highly possible for the illness to spread via contaminated high-touch areas like an office copier, classroom desks, or buttons in a hotel elevator.

This common cold-weather disease shouldn’t be confused with bronchitis. Bronchiolitis is a respiratory tract infection of the bronchioles, which leads to difficulty breathing. It affects children most often, primarily up to age 2. Since their airways aren’t fully developed, young children and babies are highly susceptible to developing bronchiolitis.

The viruses that cause this infection are RSV, rhinovirus, influenza, parainfluenza, and coronavirus. In other words, most of the common fall and winter viruses on this list. Not surprisingly, bronchiolitis peaks during the fall and winter seasons also. The viruses that cause bronchiolitis can live on surfaces and in the air for considerable lengths of time and is quickly and easily spread through touching, breathing, and ingestion.

Initial symptoms mirror those of a cold. However, they quickly evolve into wheezing, shallow breathing, flaring nostrils while having difficulty breathing, and rapid heartbeat. This cold-weather disease can be spread to young children in countless ways. Once they are infected with RSV, a cold, or the flu, they are at risk of developing bronchiolitis.

Annually, the CDC estimates that 1 million people are treated in hospitals for pneumonia and that around 50,000 people die annually because of this illness. Internationally, over 1 million children die from pneumonia each year. This cold-weather disease is also especially dangerous to the elderly because it can trigger complications with its quick onset and tendency to spread through the body quickly.

Pneumonia peaks with cold and flu season in the fall and winter, sometimes carrying over into early spring. Generally, it will develop as a secondary infection after someone has a cold or flu when the body is weakened. Pneumonia is often caused by viruses or bacteria.

Influenza, RSV, parainfluenza, and adenovirus are viruses that can cause pneumonia. The illness spreads quickly through airborne pathogens, contaminated surfaces, and contaminated hands.

If you haven’t been prioritizing sanitizing and disinfecting in your facility, now is the time to start. The threat of these cold-weather diseases is greater if you aren’t being strict about cleanliness and killing bacteria. From October to March, plan on ramping up your cleaning schedule to focus on keeping surfaces safe and germ-free for guests.

Using sprays and towels to clean surfaces and equipment can be time consuming and ineffective, as using them can actually spread pathogens rather than kill them. Make cleaning, sanitizing and disinfecting easy for you and your staff by investing in one-step EPA registered disinfectant wipes and/or FDA approved sanitizing wipes.

In addition to this, purchase wipe dispensers and stands and hand sanitizers to allow your guests and visitors to do their part in minimizing the spread of germs and bacteria. You won’t be able to keep your facility clean and germ-free by yourself, so encourage others to help by providing them with the tools to do so. Place them in high traffic areas throughout your facility to show that hygiene and cleanliness is your priority and to remind them to keep it clean.

These simple tips will keep pneumonia, the common cold, influenza, and other cold-weather diseases out of your facility this season.